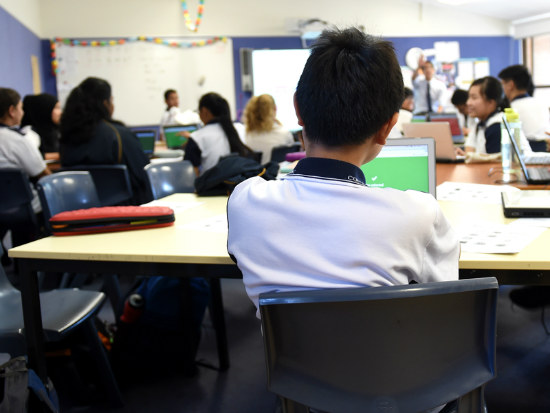 To Gonski or not to Gonski? Once again, we’re back on this question.

Student results are flat-lining, the latest release of national testing results show, and politicians remain at odds over how best to jump start them.

Primary school students are doing better than they were in 2008 in areas like reading and numeracy, but there’s been no significant change in the achievement of high school students in that time, the 2016 NAPLAN results show.

“There is some good news but overall at the national level I don’t think any of us should be comforted by these results,” ACARA chief executive Robert Randall, who’s in charge of the national testing, told ABC radio on Wednesday.

He’s hoping to see improvements over the next five years or so, once the Turnbull government’s policies are bedded down.

These include testing of year 1 students, minimum standards for school leavers and better rewarding of the most capable teachers.

“We’ve got three years now of funding under the new school funding models … and what we’ve seen is 23 per cent growth in funding and a plateauing of performance in terms of what’s actually happening in our schools,” Senator Birmingham told reporters in Canberra.

“The evidence is there that funding itself does not deliver improved outcomes.”

But Labor says it’s too early to tell that and insists only carrying through with the big increase to school funding in 2018 and 2019, in line with the Gonski plan, will help.

“We’ve only just started on that journey – to say that these NAPLAN results are a reflection of a needs-based funding model is just not true,” Labor education spokeswoman Tanya Plibersek told ABC radio.

Senator Birmingham was disappointed Labor seemed to still see the argument as one mainly about money.

Both major parties agree what money is spent needs to be better targeted.

Mr Randall said NAPLAN was not the only way of assessing performance; teachers had many ways of tracking how well students were doing.

“When mums and dads get the reports in the next few weeks … I’d hope in most cases it’s confirmation of the great information they’ll be getting from teachers,” he said.

“But if it’s different, if it’s news to the mum or dad, whether it’s spelling, punctuation or grammar or writing or reading or numeracy, my first bit of advice is go and have a chat to the teacher.”

* Reading 0.4 per cent boost to scores