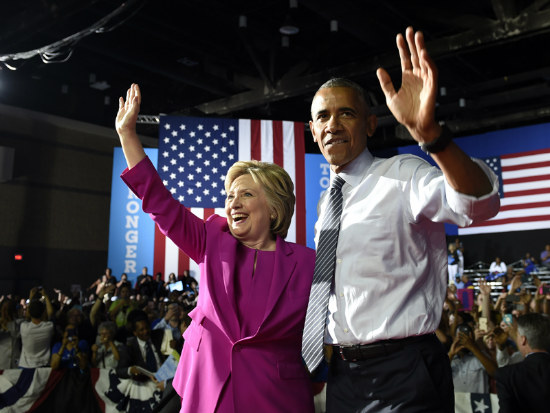 After months on the sidelines, President Barack Obama has joined Democratic presidential hopeful Hillary Clinton on the campaign trail at a rally.

“I’m here today because I believe in Hillary Clinton, and I want you to help elect her to be the next president of the United States of America,” Obama said at a rally in Charlotte, North Carolina on Tuesday.

Obama was returning the favour after Clinton backed him in 2008 and waited while she battled Bernie Sanders for the party nod before endorsing her last month.

Clinton’s trip with Obama came the same day that FBI Director James Comey said the agency will not recommend that Clinton face charges over her use of a personal email server while she was secretary of state.

White House spokesman Josh Earnest said Obama did not get advance notice of Comey’s announcement and said he would not discuss the FBI investigation with Clinton.

Presumptive Republican nominee Donald Trump, who was also due to campaign in North Carolina on Tuesday, said of the FBI recommendation, “As usual, bad judgment.”

On Tuesday, Obama told the crowd “there has never been any man or woman more qualified for this office than Hillary Clinton”.

Clinton hopes to reclaim North Carolina for Democrats in the November 8 election, which Obama won in 2008 general election but lost narrowly in 2012.

Obama’s first campaign appearance with the former first lady will close a circle on a relationship that started cordially when the two were colleagues in the US Senate, grew tense when they were rivals in the 2008 race, and became close when Clinton served in Obama’s cabinet during his first term.

Obama has focused on what he touts as Clinton’s strength of character, in hopes of shoring up support among voters who find her untrustworthy, a weakness Trump has sought to exploit.

Clinton needs Obama to woo young and left-leaning voters who backed Sanders and who made up part of the president’s voting coalition in 2008 and 2012.

Clinton has also campaigned with high-profile liberal U.S. Senator Elizabeth Warren, and she will appear later this week with Vice President Joe Biden.

Clinton and Obama travelled to North Carolina on the presidential plane Air Force One, which Trump said was a burden on taxpayers.

A Clinton spokesman said the campaign would cover its portion of the travel costs.