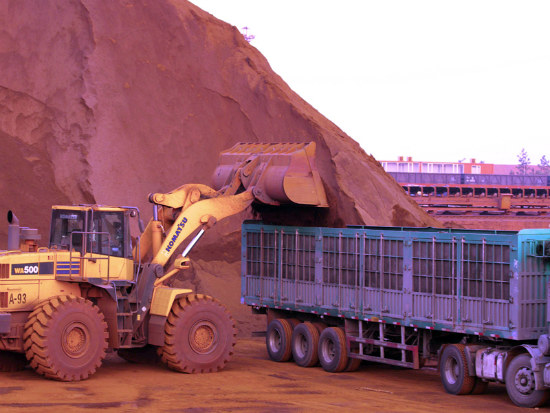 A forecast slump in iron ore prices is set to deliver another blow to already-strained federal government finances, with analysts warning a recent uptick in pricing will soon be wiped out.

National Australia Bank said on Wednesday it expects iron ore prices to slip back to $US40 a tonne from 2017 onwards, becoming the latest in a lineup of gloomy forecasts for Australia’s biggest export earner.

NAB economist Gerard Burg said the short-term increase in steel prices and profit margins this year should not overshadow the long-term challenges in China’s steel industry, which has an overcapacity of 300 million tonnes.

“Expectations that China’s steel consumption will continue to decline in coming years will be a major constraint for iron ore demand, while sub-trend economic growth elsewhere provides little opportunity for China’s declines to be offset,” he said in a research note.

In the May federal budget, the Turnbull government boosted its iron ore price forecast for 2016/17 to $US55 a tonne, up from its previous estimate of $US39 a tonne.

Lower prices will put a big dent in revenues for the federal government, which is already struggling with a forecast deficit of $37.1 billion in 2016/17.

The government’s own budget papers state that every $US10 a tonne change in the iron ore price will cause a $1.4 billion increase or decrease in tax receipts, and a $6 billion change in nominal GDP in 2016/17.

Goldman Sachs in May said iron ore prices are expected to slip to $US38 a tonne in the final three months of 2016.

Iron ore surged to $US70 a tonne earlier this year, supported by stronger steel production in China amid a stimulus by its government.

Prices have since eased as Beijing clamped down on speculative trading and as stockpiles at Chinese ports have grown.

Currently iron ore still trades at $US52.54 a tonne, nearly 40 per cent higher from last year’s rock bottom of $US38 a tonne.

The uptick has raised hopes among investors of underlying strength in the iron ore market – similar to the steadily improving crude oil prices – supported by higher Chinese steel demand.

Analysts, however, have been quick to pour cold water on the sentiment, with most expecting the pick up in Chinese steel demand to wind down in the next few months.

Large miners such as BHP Billiton, Rio Tinto and Fortescue are among the lowest cost producers, and can easily navigate a low-price environment, albeit with squeezed profit margins.

But a further slump in prices could drive struggling higher-cost junior miners like Atlas Iron and BC Iron, out of the market. Both companies have been forced to suspend operations partially, as they struggle to turn around businesses amid the plunge in prices.